The building of first container ship of 18,000 TEUs just started

It was Prince Frederik of Denmark who presided over the ceremony in the shipyards of Daewoo Okpo, South Korea. The first sheet of the first container with a capacity of 18,000 TEUs was cut last Saturday. 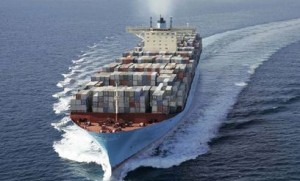 The ship will measure 400 meters long, 59 meters wide, 73 meters high. Largest container ships ever built, they will have a capacity 16% greater than the largest ships of the current fleet of Maersk Line. The company intends to place these giants of the lines between Europe and Asia, on which it expects a rebound of activity of 5 to 8% per year between 2011 and 2015.